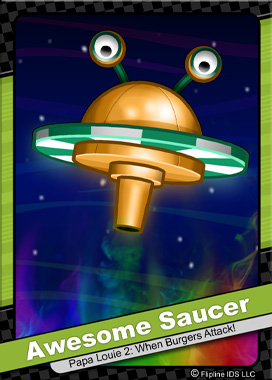 Awesome Saucers are strange, other worldly creatures who seem to have made a home in the Land of Munchmore. They spin and hover around the starry sky fueled by the limitless power of Awesome Sauce. Since their invasion, Awesome Saucers have become quite a nuisance due to their engines firing out large amounts of sauce across the landscape.

Retrieved from "https://papalouiecharacters.fandom.com/wiki/Awesome_Saucer?oldid=5495"
Community content is available under CC-BY-SA unless otherwise noted.