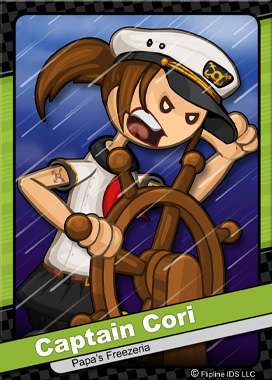 Captain Cori is the Captain of the S.S Louie. She first appeared in Papa’s Freezeria, as a closer. In Pancakeria to go, she became a normal customer.

In Papa’s Wingeria, she orders 12 shrimps.

On Robby’s flipdeck, it is stated that she saved him from an island.

Retrieved from "https://papalouiecharacters.fandom.com/wiki/Captain_Cori?oldid=6488"
Community content is available under CC-BY-SA unless otherwise noted.