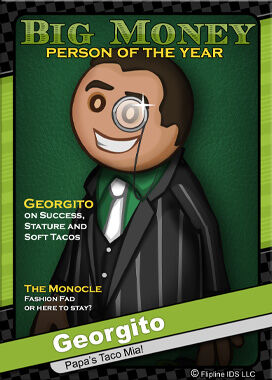 Georgito is rich man with a monocole.he first appeared in Papa's Taco Mia! He is the one of the shortest.

Georgito is short yet savvy businessman who grew up in small town of Tacodale.He aquired most of his wealth when he mowed to Starlight City.There,he opened Georgito's Palace,which soon became one of the city's most popular luxury hotel and pachinko parlor.Georgito still loves his hometown of Tacodale,and makes frequent trips back for his favorite steak tacos.[edit | edit source]

Retrieved from "https://papalouiecharacters.fandom.com/wiki/Georgito?oldid=5789"
Community content is available under CC-BY-SA unless otherwise noted.