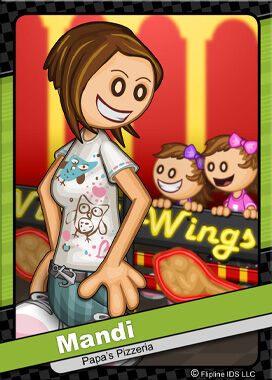 Mandi is a Caucasian woman with short brown hair and blonde highlights. She first appeared in Papa's Pizzeria (where she had long hair). It was confirmed that she is Tony's wife and they had twin daughters. She is the first customer who arrived at Papa's Freezeeria. She was one of the chefs in the new Papa's Gameria with Chuck. Her full name is Mandi Solary. She works in Papa's Wingeria.

Retrieved from "https://papalouiecharacters.fandom.com/wiki/Mandi?oldid=6786"
Community content is available under CC-BY-SA unless otherwise noted.