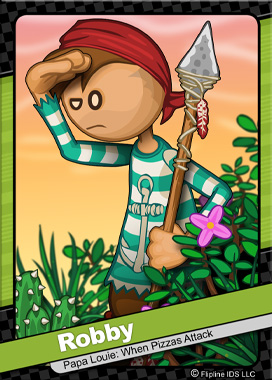 Robby is a customer, and a fan of pirates. He is a closer in multiple adaptations of the franchise; these being Papa’s Taco Mia, Papa’s Freezeria and Papa‘s Burgeria HD. His first appearance is in Papa Louie: when Pizzas attack! It is stated in his flipdeck that Captain Cori saved him from an island.

Retrieved from "https://papalouiecharacters.fandom.com/wiki/Robby?oldid=6625"
Community content is available under CC-BY-SA unless otherwise noted.