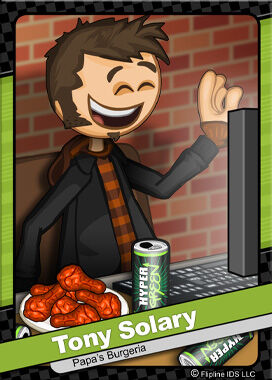 Tony Solary is one of the co-owners of Flipline Studios. He states that his top 5 games are Super Mario Bros. 3, Pikmin, Yoshi's Island, Luigi's Mansion, and Mario Kart Double Dash. He now works in Papa's Donuteria with Scooter.

Tony is also a character in Papa's Freezeria. In Papa's Burgeria, he has messier hair than in other ones. In Papa's Pancakeria, his hair is now much longer. In both the series and real life, he's married to Mandi and they have twin daughters named Sidney and Jordan. One with another tongue out and smiling.

Community content is available under CC-BY-SA unless otherwise noted.
Advertisement